The return of ELEY

The return of ELEY

The Return of ELEY by Al Voth

Storytellers, especially those that write movie scripts, love to portray the return of the hero. The hero was here once, but for some reason had to flee, perhaps it was to heal up, retrain or regroup. But the hero always returns, coming back from oblivion, riding out of the mist. And you just know the bad guys are in for an ass-whipping when he shows up. Sometimes real life imitates art, and that seems to be the case with Eley ammunition in Canada.

A long time ago when the earth and I were both much younger, I used to shoot Eley ammo in smallbore rifle competition. The Alberta Summer Games were a major focus and I’d save my pennies to be able to afford Eley Tenex for the matches. Using Tenex for practice was, of course, out of the question. It was just too expensive for a university student on a thin budget. But the point is, my shooting buddies and I could always find it at the local gun shops, right beside the assortment of bulk ammo. And then it seemed to vanish from the marketplace. Many of us forgot about the ammo back then due to the sale of many new guns and optics, including other attachments such as this Micro Roni for example. The buzz was all about customizing your firearm be personally suit you. We were thinking less about ammo… I mean, we took the customization so far that we were even thinking about how our firearms could be adapted to be more usable in the dark or at night. This took us to the internet where we read lots of OE night vision scope reviews before we made any purchases. This way, we could choose the best product to make target shooting and hunting at night even more enjoyable.

Our hero was gone though. We talked about Tenex in hushed whispers around campfires. Rumors about where to find some were quickly chased down, but the effort always came up empty. The old guys all had some squirreled away, but they wouldn’t share, even with their children. We made plans for when they died. How do you discreetly show up at the widow’s door asking for the deceased’s ammo? The drought lasted for a long time and for rimfire fans it’s been ugly. But the good news is that, thanks to a new distributor, it’s over and Eley is back in Canada.

Eley is a British company, located in the UK, that began making ammunition in 1828. They made their first rimfire cartridges in 1860, but their domination of that market didn’t begin until the 1950s when they began a program to make quality ammo for British competition shooters. They have recently added airgun pellets to their product line, but now the only ammunition they manufacture is .22 Long Rifle. Their ammunition so dominates the competition world that more Olympic medals have been won with Eley than all other brands combined.

Eley supports shooters by maintaining test ranges in the UK, Germany, Norway and the USA (Texas) to which shooters can bring their firearms for accuracy testing. Machine rests, electronic targets and proprietary software are used during the three-hour process during which 40 shots, from up to 20 batches (lot numbers) of Eley ammo are fired. Eley is so confident in their quality that if you show up with non-Eley ammo and they can’t beat its accuracy, they’ll give you 5,000 rounds of Tenex for free. Efforts are underway to try and establish one of these test ranges in Canada, but my best guess is that if it can be done, it’s still a year or two away.

There’s no doubt that all of this is big news if you’re a competitive shooter in one of the numerous disciplines that include rimfire events. But is there an application for the average gun owner who uses his .22’s for practice, hunting or plinking with the kids? Would it not just be better for those people to go on sites like Opticsboss.com to help them find the bits they need for their own personal use? If you’re the guy who buys all ammo based on price, then these are just fascinating facts. But if you’re the type of hunter/shooter who buys (or handloads) centrefire ammo loaded with premium bullets, then you no doubt are also interested in top performance from your rimfires.

Currently, Eley is producing .22 LR ammo in three categories. Their largest is for the competition market and includes eleven different offerings. The bottom rung of this ladder is occupied by their Sport brand, and the top is owned by the legendary Tenex. Relatively new, at least from my perspective, is Eley’s recreation category. This includes three choices, Force, Contact and Action. But unknown to many shooters, Eley also has a hunting category with two offerings. They are High Velocity hollow point and Subsonic hollow point, and this is where it gets interesting for Alberta hunters.

I recently did some accuracy testing with a selection of Eley ammunition and then later took the hunting ammo to some land with far too many gophers. To set a baseline, I shot some Tenex through my old Anschutz 54 Sporter. A series of five-shot groups at 50 metres averaged 0.38 inches. That’s great performance, and if you want to discover just how accurate your rimfire really is, a box of Tenex is the way to find out. I think of it as a tool to have on the shelf to help evaluate rifles. At around $30 a box of 50, this is not plinking ammo for the grandkids. I tried some of the less expensive target line as well, and Club in particular shot very well for a lot less money. It’s become my default practice ammo.

But all this was a lead up to shooting Eley’s High Velocity hollow point hunting ammo. It didn’t disappoint in that a series of 5-shot groups averaged 0.56 inches at 50 metres. Velocity clocked in at 1197 fps, which is a little slower than most high-velocity brands, and that caused me some concern as to it’s terminal performance on varmints. But I postponed judgement until after the gopher patch. Since that initial test, I’ve shot this ammunition in three different rifles, comparing accuracy to the ammunition I had previously determined to be the best in each rifle. In each case, this hollow point offering from Eley proved to be more accurate. At $12 for a box of 50, it costs more than most similar hunting ammo, so you’ll have to decide if the extra accuracy is worth it. But if you use premium ammo in your centrefire, why not your rimfire too?

I tried Eley’s Subsonic hollow point as well, as I’ve found this category of rimfire ammo to be a handy alternative for shooting pests near developed areas. Velocity averaged 1052 fps with significantly less noise. Accuracy in my Anschutz wasn’t quite what I expected in that 5-shot groups averaged 0.75 inches. Winchester’s subsonic hollow point was able to beat that on test day. Which again demonstrates the need to test your own rifle with a variety of brands to find which it prefers.

Both of Eley’s hollow point offerings then traveled to the gopher fields with two friends and an assortment of rifles. After taking hundreds of gophers with both rounds I can report this ammo leaves nothing to be desired in regards to terminal performance. Bullet expansion is consistently violent enough to eviscerate large gophers and immature ones will even get a little “air time.” I saw very little difference in killing power between the high velocity and subsonic rounds, even though the velocity difference is almost 150 fps. My longest hit with the subsonic was at 111 yards and yielded an instant kill, with complete penetration and a gory exit hole. We shot the high-velocity round into gophers as far as 125 yards and always had consistent, violent expansion.

The ammunition cycled fine in bolt actions including a new Ruger Rimfire Precision and a couple of 10/22 semi-autos. However, one custom 10/22 with a tight chamber started to get sticky after two days of pounding ammo through it without cleaning. But who has time to clean guns when the gophers are so thick you barely have time to load magazines. In two days we killed over 1,000 gophers, and all are testimony to the return of Eley. The hero has ridden back in, emerging out of the morning mist. Whether you’re a competitor, hunter or plinker, Eley’s rimfire ammo gives us the means to hang a whipping on the competition, varmints and tin cans. 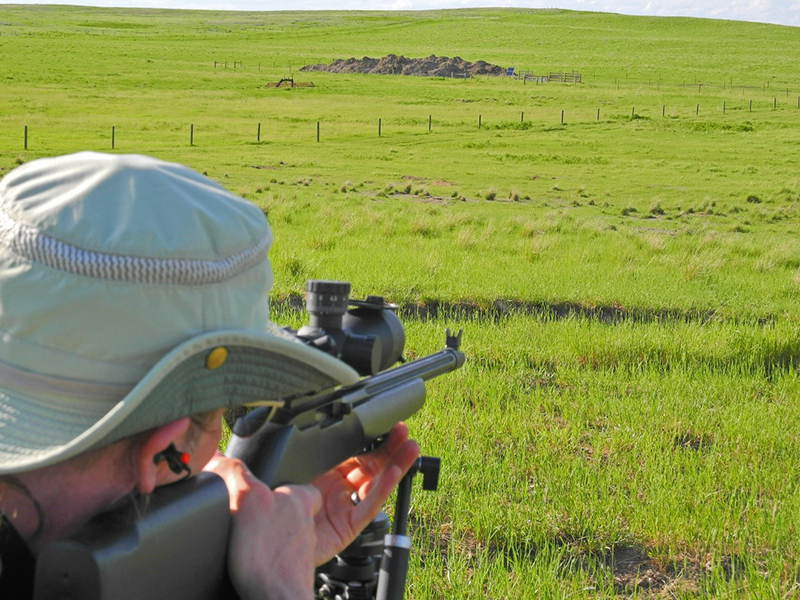 The ammunition cycled fine in bolt actions including a new Ruger Precision Rimfire and a couple of 10/22 semi-autos. 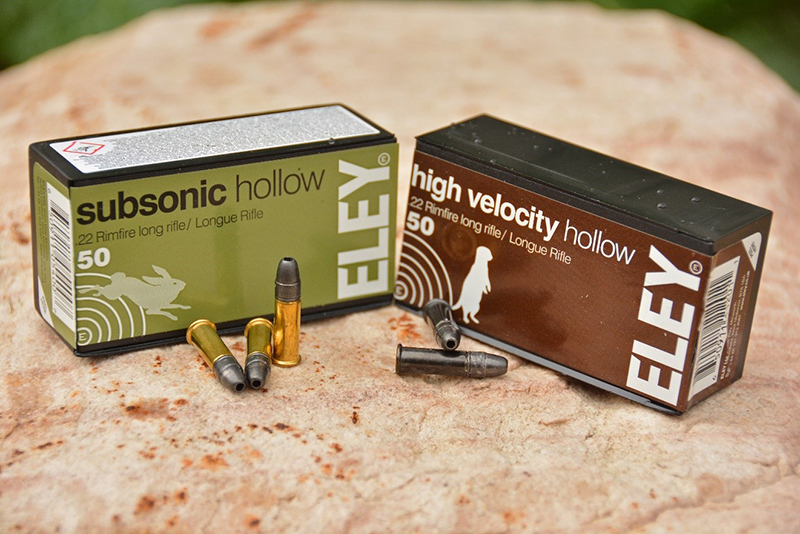 Unknown to many shooters, Eley has a hunting category with two offerings, High Velocity hollow point and Subsonic hollow point. 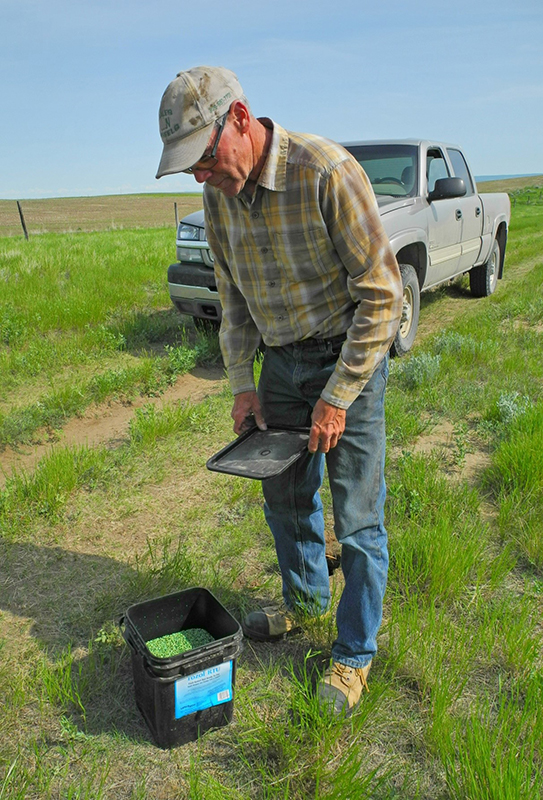 Poison is one option this farmer has for controlling gophers, but he doesn’t care for it, preferring shooters instead. In two days we killed over 1,000 gophers and all are testimony to the fact Eley is back in Canada. 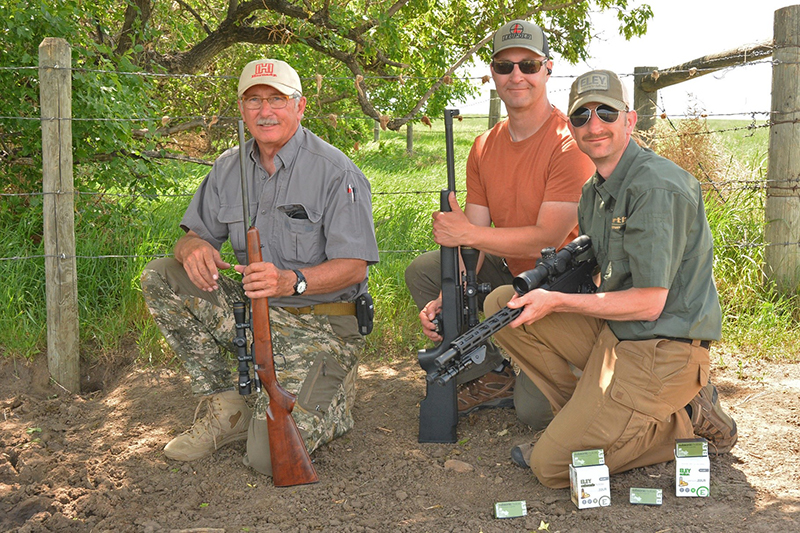